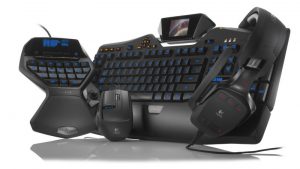 If you have ever wanted to deck out your gaming machine in a bunch of assorted peripherals that resemble the bridge of the USS enterprise, now is your chance.  Fresh from providing the PC gaming world with the Logitech G13 Advanced Gameboard, Logitech have unveiled an extension of its award-winning G-series with three new products; The Logitech® G19 keyboard for gaming, the Logitech® G35 surround sound headset and the Logitech® G9x laser mouse.

The Logitech G19 Keyboard for Gaming
Giving you an arsenal of advanced gaming technology, the Logitech G19 keyboard for gaming is the first Logitech keyboard to feature a color GamePanel LCD. The tiltable, 320-by-240-pixel display provides valuable in-game information for over sixty games, including World of Warcraft® (requires installation of included Logitech GamePanel software). In addition to in-game information, the screen can show VoIP communication data, clock, CPU load, or other non-gaming specific items such as pictures or videos. And you can easily switch among types of information – without ever leaving your game.

The Logitech G9x Laser Mouse
Providing precision at any hand speed (up to 150 inches per second on most popular gaming-mousepad surfaces), the Logitech G9x laser mouse extends the promise of the award-winning Logitech® G9 Laser Mouse with its next-generation laser sensor. Featuring on-the-fly adjustable dpi from 200 to 5000 dpi, the G9x mouse makes it easy to go from pixel-precise targeting to lightning-fast maneuvers without pausing the action.

The Logitech G13 advanced gameboard wins Best of Innovations in Electronic Gaming
The new G-series products join the recently announced Logitech® G13 advanced gameboard, which was just awarded the CES 2009 Design and Engineering Award: Best of Innovations in Electronic Gaming. The G13 gameboard offers a contoured design that complements the natural shape of your hand and fingers. So you don’t have to take your eyes off the screen, the concave keys along the home row make it easy to locate buttons by touch.

Wireless 360 Controller not working? Try this

NX Preview Trailer available on the 21st of October 1am AEST